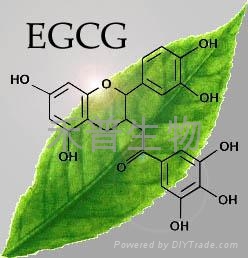 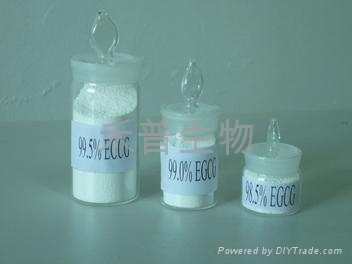 DESCRIPTION:
Our product, EGCG is a kind of component extracted from the Chinese green tea. It is the mainly
active and water-soluble component from green tea, whose content is the highest in the tea
catechins. It accounts for 9-13% of green tea in net weight. By virtue of its peculiar stereochemical structure, EGCG possesses much stronger anti-oxidant activities and plays an important role in preventing from cancer and cardiovascular diseases. In addition,it is potently used as the reversal agent of MDR (Multidrug Resistance), which may improve the sensitivity of the cancer cell to the chemotherapy drug and reduce the toxicity on the heart.

*Caffeine is according to customer requirement

Biological effects:
(-)-Epigallocatechin gallate (egcg), an most potent antioxidant polyphenols of green tea, is
associated with antioxidant, antitumor and antimutagenic activities. The antioxidant activity is at lest 100 times effective than vitamin C and 25 timeseffective than vitamin E at protecting cells and DNA from damage which are believed to be linked to cancer, heart disease and other potentially fatal illnesses. The biological benefits of EGCG are generally attributed to their antioxidant activity to scavenge free radical oxygen.
EGCG is the major component of the polyphenolic fraction of green tea. It makes up about
10-50% of the total green tea catechins includeing epigallocatechin gallate (EGCG),
epigallocatechin (EGC), epicatechin gallate(ECG), epicatechin(EC), gallocatechin gallate (GCG), catechin are major catechin of green tea catechin. The antioxidant activity increased in the following order: EC<ECG<EGC<EGCG.
Many studies indicate EGCG plays a role, which protects aganist free-radical DNA damage,
protects aganist the effects of ionizing radiation and ultraviolet radiation, ;inhibits lipid
peroxidation, decreases serum cholesterol levels, LDL, VLDL and triglycerides, interferes with
the binding of cancer-causing agents to cellular DNA, helps to neutralize dietary carcinogens,
works with enzymes and other antioxidants in the intestine, liver and lungs to prevent the
activation of certain carcinogens before they damage DNA. As a free radicals scavenger, EGCG
combats the effects of pollution, sunlight and smoking, helps skin from wrinkling and aging.

Safety:
Green tea consumption of as much as 20 cups per day has not been assoiated with any
significant side effects. Acute studies reported the oral LD50 of EGCG in mice was 2170mg/kg
bw.