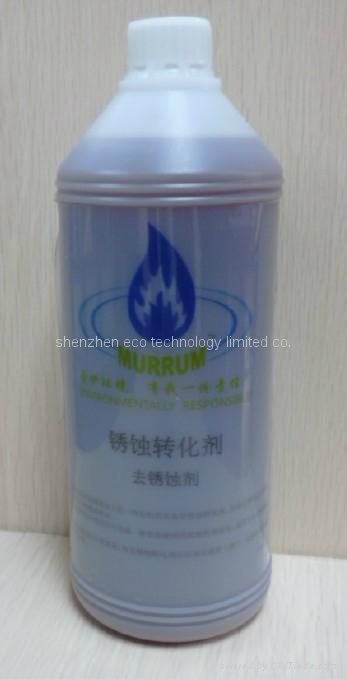 Treatments Coverage   Generally, only one treatment is required. 10 — 15m2 per litre depending on the amount of rust present


Trans Rust is a water-based rust converter manufactured from a complex blend of organic acids. It works by chemically combining with rust to form a tough organic matrix that bonds to the metal surface inhibiting further corrosion.

Trans Rust is a remarkable product that will work on any rusted surface. It only requires removal of loose rust and paint before being applied by brush, roller or spray.

Trans Rust will work on rusted surfaces whether they are wet or dry and even in humid and damp conditions.

Surfaces treated with Trans Rust are fully converted when the surface turns blue/black — usually 6 to 24 hours after application. Treated surfaces that are to be painted or coated (including galvanised or chrome finishes) must be washed with water and allowed to dry thoroughly before coating.

Trans Rust is the ideal solution for situations in which cost or practicality does not allow for the use of conventional surface preparation methods such as shot blasting, needle blasting or sanding. Trans Rust is also an ideal and cost effective treatment for freshly cleaned surfaces that have formed a superficial layer of rust.

Trans Rust is a remarkably safe product to use. It is formulated without the use of solvents, mineral acids or phosphates and the ingredients are completely biodegradable. Metal treated with Trans Rust is safe in contact with food and potable water.

The organic matrix formed by Trans Rust is a stable, non-flammable compound. Metals treated with Trans Rust can be cut and welded without hazard to the operator.

Trans Rust is the environmentally responsible choice for rust treatment. Trans Rust is formulated without the use of corrosive mineral acids, phosphates or solvents. Excess Trans Rust washed off after treating rusted surfaces is not hazardous to the environment and is completely biodegradable.

Trans Rust is the ideal choice wherever rust is a problem.

It is widely used on farms to protect metal sheds and buildings, to treat corrugated iron roofs, vehicles and irrigation equipment.

Trans Rust is ideal for treating reinforcing steel used in construction and for protecting plates, pipes, flanges, joints and structural members before installation.

Trans Rust treats all vehicle rust and can be painted after treatment. With Trans Rust vehicle maintenance can be carried out at any time with easy application by spray or brush.

Trans Rust works exceptionally well on heavily rusted surfaces that are impractical to treat by conventional methods or in inaccessible locations.

Safety considerations are paramount when treating storage tanks, pipelines and equipment in hazardous situations. Non-flammable, water-based Trans Rust is ideal in these situations.

Trans Rust is approved for use in areas such as grain silos, food storage areas, rain water tanks and food preparation areas

Remove old paint, loose or flaky rust with a wire brush. Clean off surface contamination including chemicals, salt, oil and grease with a high-pressure water spray.

Immediately before applying Trans Rust, wet the prepared surface with a fine spray of clean water and allow any surplus water to drain. Apply undiluted Trans Rust using a brush, roller or conventional airless spray.  Allow the treated surface to cure for 12 to 24 hours.

For heavily rusted surfaces use a two-stage treatment. Apply Trans Rust diluted with an equal volume of water to the prepared surface. After 30 to 60 minutes, apply a second coat of undiluted Trans Rust and wait 12 to 24 hours for curing.

Remove all excess black residual dust from treated surface with water and allow to dry thoroughly before sealing or painting.

Q: What happens if you do not paint or coat steel treated with Trans Rust?

A: Trans Rust is not the total answer to rust problems. Rusting will eventually reappear if the surface is not treated with a protective coating.

Q: Can you paint directly onto Trans Rust without any preparation?

A: No. Take care to remove excess product as per the label directions before painting. Failure to do so may result in pepper-like spots appearing on the paint.

Q: How long after treating with Trans Rust will the surface remain rust free?

A: The time taken for the rust to reappear depends on weather conditions; heat, moisture and salt will all tend to reduce the effective time before re-rusting occurs.

Q: How far can you go in diluting Trans Rust?

Q: Can you weld steel treated with Trans Rust?

A: Yes. After treatment with Trans Rust steel can be welded successfully.

Q: What does heat (exhaust pipes) do to it?

A: Trans Rust will convert rust when metal is cold. Excessive heat destroys the organic component of the protective film formed by Trans Rust and, on cooling, rust problems can recur.

Q: Can Trans Rust be applied under water?

A: No – but it can be applied to items that are to be submerged.

Q: What is the minimum waiting period before the surface can be worked after treating with Trans Rust?

A: From 1 to 24 hours depending on weather conditions or when the treated surface turns blue-black.

Q: What is the freezing point of Trans Rust? Does freezing affect the performance of the product?

A: The freezing point is approximately –15°C. The product reconstitutes when thawed and stirred.