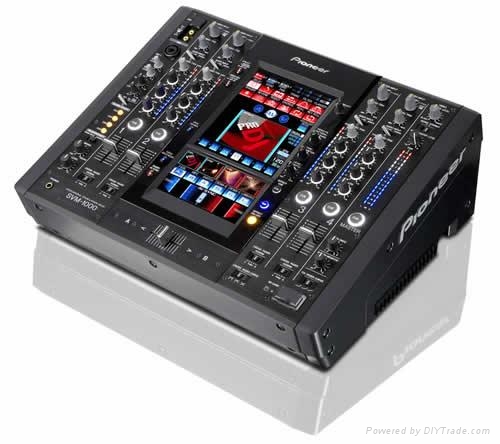 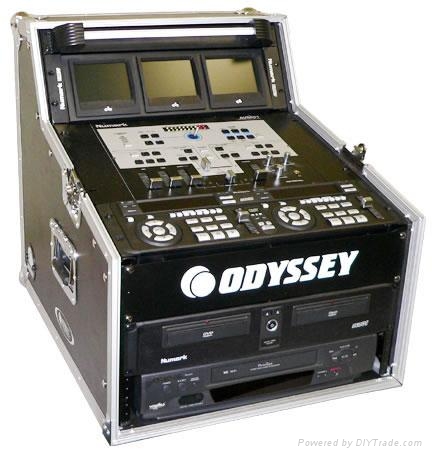 The Pioneer SVM1000 is the world's first reference audio and video combination mixer designed for elite DJs, VJs and club venues to enhance their audio/video performance and provide their patrons and fans with an all encompassing sensory experience. In addition to mixing audio and video, the SVM1000 mixer incorporates a built-in 11-inch LCD touch-panel display, symmetric channel layout, 4-channel audio and video inputs, Still Image Sampler and hundreds of combinations of video effects. Features and audio mixing capabilities of the SVM1000 are similar to the industry standard Pioneer DJM1000 and DJM800 mixers, which give DJs and VJs the creative freedom to easily build and create synchronized visual effects to accompany their audio mix for a complete entertainment encounter.

"Traditionally, the roles of DJs and VJs were separate - the DJ mixes the music while the VJ controls the visuals - their performances awkwardly coordinated with one another. With the SVM-1000 the audio and visual effects are seamlessly controlled in one master area," said Matt Dever, vice president of sales and marketing for Pioneer's Professional Sound and Visual Division. "Best of all, operation of audio and video mixing are done similarly to our popular DJM audio mixers making the SVM-1000 an easy transition for any DJ and/or VJ."

The SVM-1000 mixer was designed to easily integrate into a club environment's DJ booth due to its physical traits. The face of the mixer

incorporates a "channel symmetric layout" featuring an 11-inch LCD touch panel in the center of the mixer. With a quick touch of the screen, video manipulation follows the audio with fluid transition.

DJs can synchronize audio and video with up to four sources simultaneously. Each of the four channels features independent fading and equalization for traditional mixing techniques. The mixer is also capable of sound-only or visual-only control for creative mixing according to the DJ/VJ style. For enhanced visuals of any mix, the cross fader is capable of various video effects such as FADE, WIPE and CHROMAKEY.

quickly create exciting visual treatments orchestrated to music. When video isn't available from a source, such as a CD, the DJ can still create a visual performance through pre-loaded graphics and images accessed from an animated on-screen icon for quick selection.

The mixer automatically detects the tempo of the music and synchs it with the video content. Twe e beat effects are available including Delay, Echo, Pan, Transformer, Filter, Flanger, Phaser, Reverb, Robot, Chorus, Roll and Reverse Roll which can also be combined with other visual effects such as Inverse, Edge and Hue for numerous arrangements.

variations on the screen.

Custom text messages can also be displayed to the tempo of the music in various beat-linked expressions. Six text patterns are available

including Random, Zoom, Block, Rotation, Crush and Slide which can also be inputted through its built-in USB connection.

The SVM-1000 lets users incorporate their own images and photos from an external memory device for use in their performance through a SD slot and USB connection. Its "Still Image Sampler" further enhances visuals by mixing images, such as logos of DJs, events or sponsors with videos or other still images with the ability to loop and play them as a slide show.

• Video: The video signal input through the Analog to Digital Converter is image processed at 600MHz / 32-bit / 4800MIPS (Million Instructions per Second) to maintain high dynamic range and minimized noise resulting in

Mixer Made In China Products