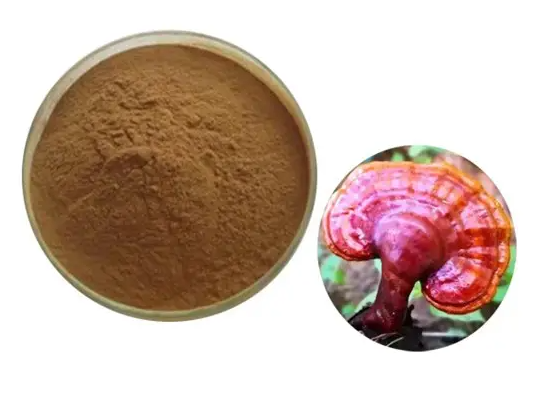 Ganoderma lucidum has been known as the "immortal mushroom" in China and has been used in Oriental medicine for more than 2000 years. In recent years, its active ingredients have been the subject of intensive research, focusing on its apparent ability to prevent or treat certain cancers, to help in the treatment of liver disease, HIV infection, acute or periodic herpes virus infections, hypertension, chronic bronchitis, allergies and asthma, and to benignly modulate immune function. Ganoderma lucidum grows mainly on decaying wood or tree stumps in the wild in the coastal provinces of China. Its seed entities are mainly used medicinally.

1. Anticancer activity
Animal cancer studies (e.g., rat connective tissue cancer model) have shown a 50% tumor regression rate after treatment with Ganoderma extracts. Reishi extract has been used by some surgeons in Japan to treat cancer patients and its significant anti-tumor and immune-stimulating effects have been noted in numerous cases. Polysaccharides isolated from Ganoderma lucidum and other medicinal mushrooms have been patented in Japan for use as immunomodulators in cancer treatment. It has been mixed with chemotherapy or radiation therapy and has shown the ability to reduce side effects, enhance therapeutic efficacy, and has been used to promote recovery from disease.
Studies in China have shown that Ganoderma extract enhances the anti-tumor capacity of macrophages and T-cells. Ganoderma extracts are also known to have other immunomodulatory effects and antioxidant properties. Animal studies have also shown that the polysaccharide fraction of Ganoderma lucidum induces apoptosis (programmed death of cancer cells) in leukemia cells and induces cell differentiation in 40-45% of leukemia cells when treated with Ganoderma lucidum polysaccharides, demonstrating its apparent cancer therapeutic potential. These effects were mainly due to a rise in the secretion of antitumor cytokines (signaling agents), namely TNF-alpha and IFN-gamma, induced by Ganoderma lucidum polysaccharides, and these two cytokines showed synergistic effects in inhibiting leukemia cell growth. In a related trial, the D-glucan polysaccharide fraction of Ganoderma lucidum was shown to produce dramatic tumor recession when studied in rats with malignant tumors. In many experimental animals, selected groups showed complete tumor regression after 5 weeks of beta-D glucan polysaccharide fraction injection. experiments conducted by Y. Song et al. reported a 90% tumor suppression rate and 75% tumor regression in diseased animals.

2. improvement of the immune system: (bronchitis, asthma, nasal allergies, herpetic diseases and HIV infection)
Ganoderma lucidum extract modulates numerous components of the immune system, some of which are believed to have significant anti-tumor properties. In a Chinese trial including 2000 cases, the use of concentrated Ganoderma products showed good response after treatment of chronic bronchitis in the elderly. The study showed a success rate of over 60%. Immunoglobulin A levels in the sputum showed a significant increase after several months of treatment. Immunoglobulin A is the main immunoglobulin found in the respiratory tract. Its deficiency is generally seen in nasal allergies, systemic lupus and rheumatoid arthritis. Ganoderma extract supplements have been shown to improve asthma and nasal allergy symptoms. Two important components of Ganoderma lucidum extract, oleic acid and cyclic octasulfide, have been shown to inhibit the release of histamine, which may be why it is beneficial in asthma, while a specific protein-binding polysaccharide in Ganoderma lucidum extract, called Glhw-02, has been shown to possess effective antiviral properties against type 1 and type 2 simplex viruses under laboratory conditions. A small human trial showed that Ganoderma extract "dramatically" reduced pain in two patients with post-herpetic neuralgia and severe pain in two other patients with shingles infection (herpes zoster, caused by the herpes virus).
Under laboratory conditions, various reishi acids and polysaccharides in Ganoderma lucidum extracts have been shown to act as active anti-HIV substances and have demonstrated the ability to reduce viral replication by up to 50% at conservative doses.

3. Cardiovascular health: (hypertension and reduction of platelet coagulation)
Two controlled human trials have shown that Ganoderma lucidum extract can reduce hypertension to extremely significant levels (cardiac systolic and cardiodilator blood pressure), even in patients who have not previously responded to known antihypertensive drugs. Animal studies have shown that Ganoderma lucidum extract lowers blood pressure through a central inhibitory effect on sympathetic activity, although this effect does not essentially slow the heart rate or cause a sedative effect. In a laboratory setting, Ganoderma lucidum extract had a mild to moderate effect on reducing platelet accumulation, a function that may be useful in the future for reducing the risk of cardiovascular disease. It has also been shown to increase endurance, blood flow to the brain and improve cellular oxygenation. Likewise, it contributes to energy synthesis at the cellular level, and it may improve cardiovascular health and be used in some cultures to enhance memory and intelligence, including successful use in studies of Alzheimer's patients.

4. Liver-protective effects (hepatoprotective properties)
Ganoderma lucidum is prescribed in China for the treatment of chronic and acute hepatitis. The multiple polysaccharides in Ganoderma lucidum have strong anti-hepatotoxic properties, and they have shown hepatoprotective effects in laboratory settings under chemically induced injury, including protection against the highly toxic and lethal substance carbon tetrachloride.

5. Support for the nervous system
Reishi has traditionally been recommended by Chinese and Japanese herbalists for insomnia due to its "sleep promoting elements". Long-term use results in a marked promotion of slow-wave sleep. In China Reishi is prescribed for many psychiatric and neurological problems, including muscle disorders, loss of appetite and debility following long-term illness.

If you wanna know more about us, please feel free to contact me at:
Whatsapp: +86 13548561509
Email: staherb18@staherb.cn
or you can send me online message if it's convenient for you.
We look forward to cooperating with you!