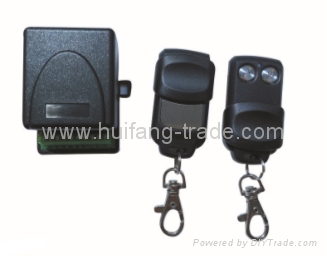 1.When electrified, LED lights 1 second, it's ready to work.

4. DELETING FUNCTION:
A. Delete one code: Press P2 for about 1 second and release, LED lights, press the button that you want to delete the code. Then it's ok.
B. Delete all the codes: Long press P2 for 8 seconds, LED lights, release your hand and LED goes off, now all the codes are deleted.

5. NOTICE:
A. Since the data of rolling code is relatively bigger, it'll take you a little more time to operate remote with rolling code than that with fixed code.

B. If you learning same code for more than one time, only the last code is memorized.

Remote Control Made In China Products