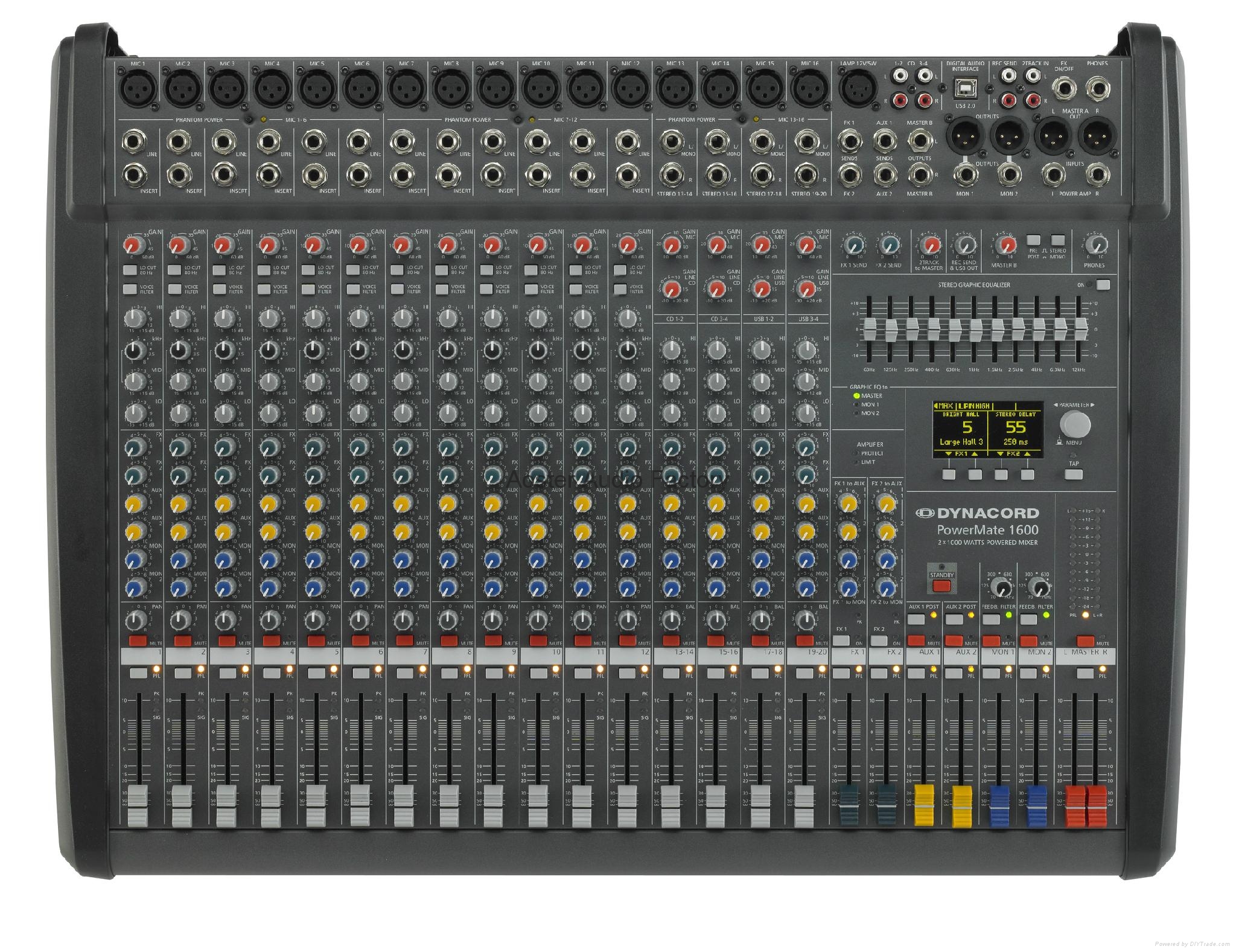 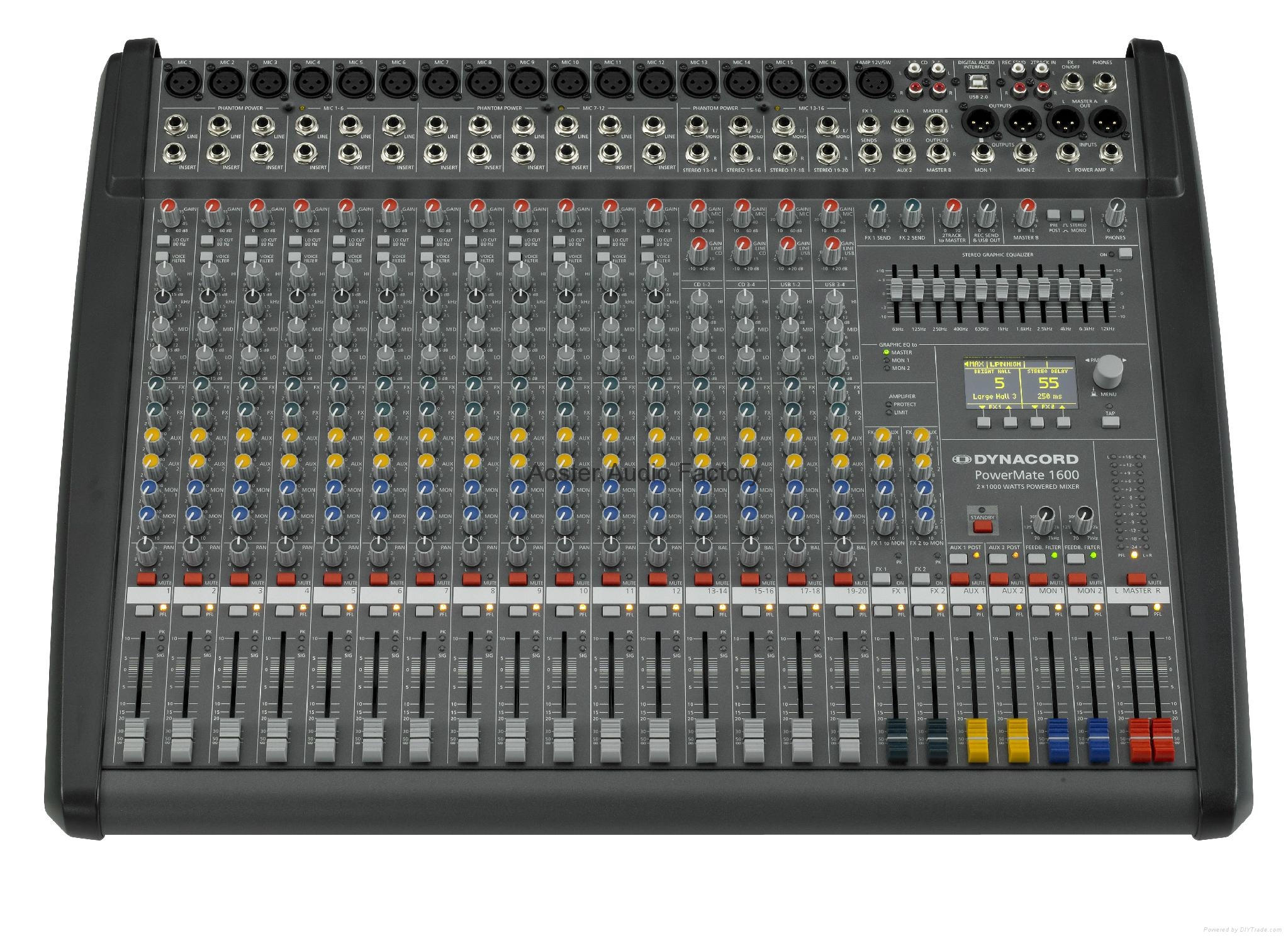 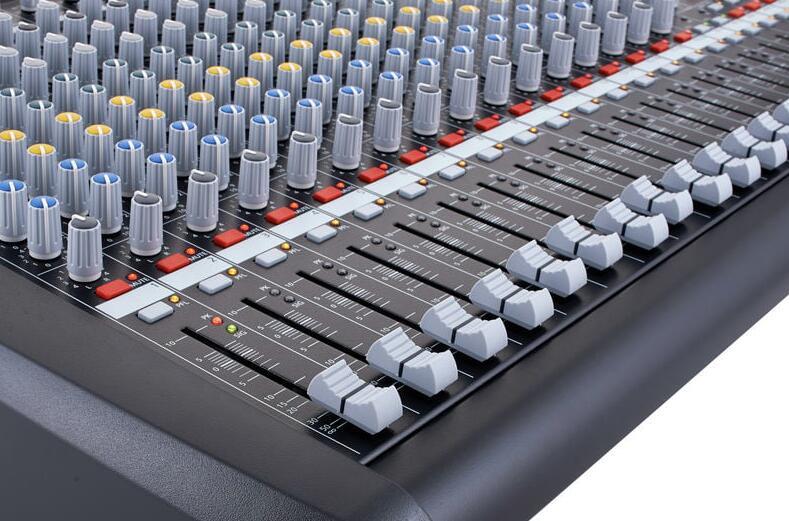 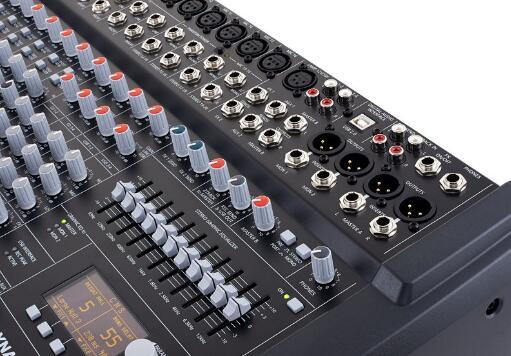 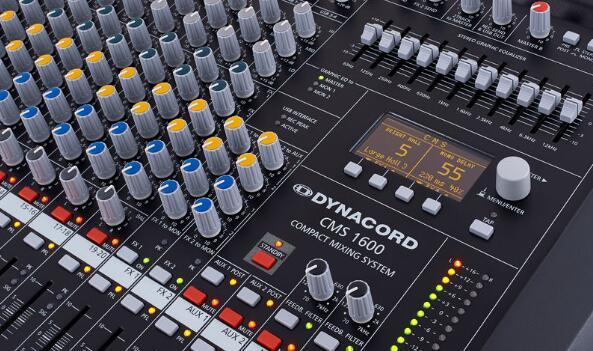 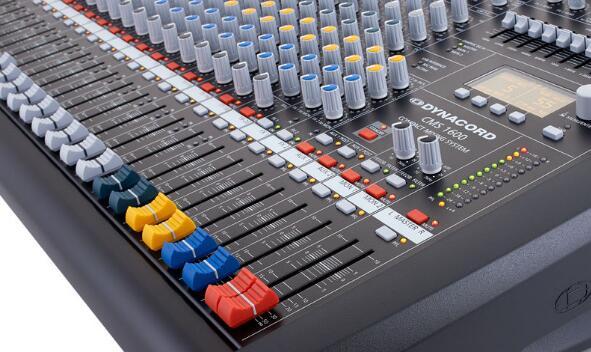 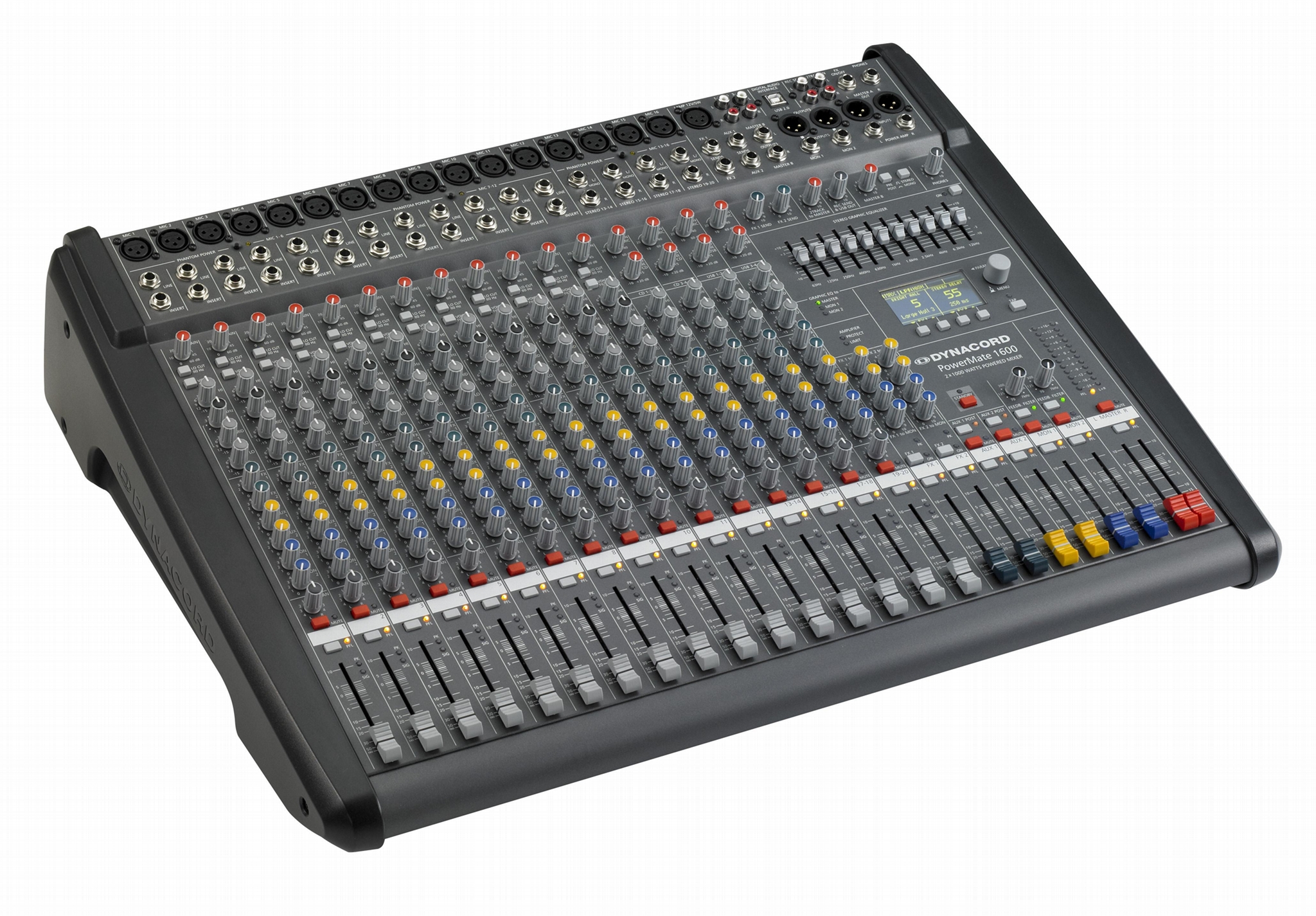 The +48V phantom power for condenser microphones can be switched in groups of six.
The Line Input and Channel Insert are implemented as jack sockets.
The Gain can be controlled in the range 0-60 dB.
The switchable Lo Cut filter (80Hz, 18dB) serves to eliminate low-frequency noise. A very typical DYNACORD feature is the asymmetrical Voicing Filter by means of which, if desired, the voice can be powerfully emphasized in the mix.

Optimized for ease-of-use, the 3-band semi-parametric equalizer makes it possible even for unpracticed users to perform the requisite corrections swiftly and intuitively.

With its extended buss structure, the PowerMate-3 offers very flexible configuration options. In all, 6 AUX busses are available:

2 (FX) are assiged to the two effects sends;
2 (AUX) can be configured either as monitor or effects sends by means of a switch in the Main section;
2 (MON) are designed as monitor sends, each being equipped with a sweepable anti-feedback filter in the Master section.

MUTE and PFL switches, each with its own LED, make it possible to mute each input channel individually and/or listen to its pre-fader signal.

Each channel offers a Signal Present and Peak LED for level control.

The channel faders are dust-protected and offer not only excellent crosstalk attenuation but also a practice-optimized control characteristic.

All potentiometers and faders are high-quality components from ALPS.

The stereo input channels are equipped in much the same way, but optimized, naturally, to carry stereo signals.

Two of the four stereo inputs of each model are additionally equipped with cinch (RCA) sockets switched in parallel for CD or MP3 players. The two other stereo inputs receive in addition the four channels of the digital audio interface USB 1-2 and USB 3-4 Separate Gain controls are provided for the Stereo Line and Mic inputs to permit them to be used in parallel if desired. Three-band tone controls are provided and a Balance control replaces the PAN control found in the mono channel strips.

In the Master Section, too, the PowerMate is lavishly equipped.

The 11-band stereo equalizer can be routed to the Master channels or else to either or both of the Monitor Sends according to choice.

The FX1+2 Returns as well as the AUX1+2 and MON1+2 Sends are on faders just like the Master L/R signal, which makes for comfortable and intuitive operation.

The Master B signal is available pre or post Master L/R fader and can be mono-summed if desired. The Master signal is also available on the REC Send cinch (RCA) output with level control. The level meters of the PowerMate comprise two LED chains of 12 LEDs each. The display range covers 40 dB; what is shown is the level in dBu at the master outputs. When the PFL switch is activated, the left-hand LED chain shows the internal level of the master buss in dBu.

The Standby switch mutes all channels e.g. during pauses, with only the 2TRACK-to-Master input remaining active for the playback of interval music.

A 4-pin XLR socket is provided for the connection of a standard 12V/5W gooseneck lamp.

The USB 2.0 port serves as a digital audio interface between the PowerMate and a PC or Mac.

Four channels can be transmitted in either direction simultaneously. This interface can therefore be used either for the input of audio signals (e.g. for playback or interval music) or else for live- or studio-recording applications. It is configured by selecting the relevant setting in the menu.

For the use of the PowerMate with a PC or Mac, a free Cubase LE license as well as the requisite USB drivers are included free-of-charge on the supplied DVD.

The MIDI input also supports the remote switching of both internal effects units using a master keyboard or MIDI footswitch.

The PowerMate has two integrated stereo multi-effects processors that work independently of one another, each offering 100 effects algorithms optimized for live performance, the most important parameters of which are editable. Linear 24-bit AD/DA converters and 48-bit double-precision processing guarantee the finest studio quality based on state-of-the-art technology.

The 100 program locations of each device are packed with high-quality reverbs, halls and plates that deliver professional results in live performance on stage as well as in both studio and home recording environments. Other presets include Echo/Reverb and Chorus/Reverb combinations, a variety of delay, flanger, chorus and doubling algorithms, as well as special reverb and delay programs. When a delay effect is active, the delay time can be synchronized to the beat of the music using the TAP key.

Edited effects programs can be stored in the 20 User memories, assigned names, and later selected and used in the same way as the presets.

The large, high-contrast OLED display is easily read from a wide range of viewing angles—even in very bright surroundings. The operation of the effects units and processing menus is intuitive and made easier still through the use of soft keys and a rotary encoder.

For the basic settings, configuration, use of the effects and special functions, a wide variety of editing options can be selected from a multitude of menus.

Particularly valuable in making it possible to adjust the PowerMate perfectly to the selected loudspeaker cabinets, thereby optimizing the audio performance and maximizing the operating safety and reliability of the system, are the LPN Processing and Speaker Protection menus.

Typical small to medium-sized loudspeaker cabinets, for physical reasons that have nothing to do with their make or quality, exhibit distortion in the transient response of the woofer. Since neither graphic nor parametric equalizers can do anything to alleviate this problem, the PowerMate offers a configurable LPN (low-pass notch) filter.

Depending upon the size of the loudspeaker cabinet being used and also to adjust to problematic acoustics (such as those of bassy, boom-ridden rooms), the LPN filter can be set to either High or Medium. The result is considerably greater punch (e.g. from the bass drum), an extension downwards of the frequency response, and improved transparency in the bass and midrange.

This menu allows you to match perfectly the continuous power output of the PowerMate’s power amplifiers to the connected loudspeakers in the interests of greater operational safety and reliability.

Through dynamic limiting of the maximum power at the output, loudspeaker damage due to thermal overload can be avoided, without the wide dynamic range of the power amplifiers being sacrificed. Once the maximum permissible power handling of the connected loudspeaker cabinet has been selected from the menu—the actual peak dynamic power handling capacity in audio applications of almost all loudspeaker cabinets is many times this nominal value—the speaker protection supervises permanently the amount of energy being fed to the loudspeakers, only limiting it in the event of a threatened overload, and even then, doing so softly and inaudibly.

For peak levels of short duration, the full output of the power amplifier remains available, even when relatively small cabinets are being used. As a result, not only is the maximum dynamic range of the system maintained but also, and at all times, the highest degree of operational safety and reliability.

The PowerMate is equipped with a professional, extremely powerful, stereo power amplifier that uses modern and highly efficient Class-D technology.

What this means is that at a nominal output of 2 x 1,000 watts RMS into 4 ohms (or 2 x 1,350 watts RMS into 2.7 ohms), comparatively little dissipation is generated within the device, and the power consumption is thereby dramatically reduced—by more than 55% compared with conventional power amplifiers! The minimal load impedance at the output is 2.7 ohms, making operation with up to three 8-ohm loudspeaker cabinets per channel, connected in parallel, possible with no problems.

The audio performance is on the highest professional level, as is shown by the PowerMate’s exemplary figures for freedom from distortion, slew rate, and freedom from intermodulation.

The overall power supply is handled by an extremely stable, microprocessor-controlled, switching power supply, bringing massive gains in terms of weight-saving over a conventional toroidal transformer. Another advantage is the automatic mains voltage switching, which makes it possible to use the PowerMate virtually anywhere in the world without reconfiguration. Voltage surge protection is also integrated, whilst a ‘soft start’ function prevents the mains fuse tripping when the device is switched on.

The PowerMate is equipped, naturally, with all the protective circuitry familiar from DYNACORD power amplifiers and satisfies even the extreme demands of hard tour use. The power amplifiers are protected against thermal overload, short-circuit, back EMF and no-load operation as well as high-frequencies or DC at the output. Both outputs, here, are supervised independently so that, should a fault occur, only the channel affected is shut down. When the device is powered up, there is a delay before the power outputs are connected, to obviate the risk of noise.

The thermal stability of the PowerMate is assured by two very quiet fans the speed of which is continuously variable. The front-to-rear airflow allows the device to be used in large or small racks; furthermore, the PowerMate is equipped with a processor-controlled thermo-limiter, so if ever the threat of overheating does arise, the clip limiter intervenes in a highly musical way, acting only upon the peaks. In this way, a total shutdown of the power amplifiers is effectively prevented, as is any obtrusive fall in the overall volume level. The PROTECT and LIMIT LEDs on the front panel indicate the current operating state of the power amplifiers.

Innovative Solution for Protection and Transportation

The PowerMate 1000 and 1600 are supplied with a very robust plastic lid with an integrated handle—a highly innovative solution that offers optimal protection for the device as well as greater carrying comfort.

For the larger PowerMate 2200, due to its greater size, a flight-case solution is recommended (available as a further option is a dust cover: the DC-PM2200-COVER).

Audio & Sets Made In China Products