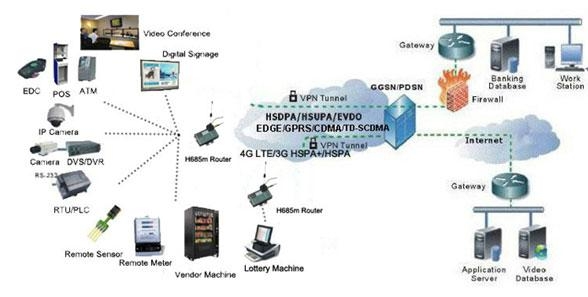 Highly resistant elements have been used to design and manufacture these industrial routers, both electrically as well as mechanically and resistance to extreme temperatures has been priorized by using low consumption components and increasing ventilation.

E-Lins has developed an industrial wireless router H685m. This industrial 2G/3G/4G router possesses specific characteristics which has enabled it to comply with the demanding requirements impossed by the utilities market (suppliers of Electricity, Gas, etc.), hence making it compliant with most industrial router scenarios.

What This Product Does

Tests in the Field-High Compatibility

Compatibility is the most important aspect to consider when you're selecting a 2G/3G/4G router. To ensure the best compatibility, E-Lins has made certain that our 3G/4G Routers are compatible with the ISPs in the regions in which they are sold. We have teams around the globe continually testing our Routers with the networks and carriers to ensure that end users can feel confident that their routers will operate flawlessly where they live and work.

The H685m Router stands out with its 2G/3G/ 4G and WAN connection back-up, which keeps users online when one connection fails. E-Lins' 2G/3G/4G Router provides users with both 2G/3G/4G Preferred and Wired WAN Preferred back-up modes, while other brands provide one or the other. This brings users a high degree of flexibility when users are setting up the networks with considering connection costs and length of downtime.

Complying with the IEEE 802.11n standard, H685 Router can establish a WiFi wireless network with transmission speeds of up to 150Mbps, while mitigating data loss over long distances and through obstacles in a small area locally. Above all, users can easily pick up their wireless network's signal at longer distances from the router, where with legacy 11g products they would have to be much closer.

Compatible with LTE/HSPA+/HSUPA/HSDPA/UMTS/EVDO/EDGE/GPRS networks, tested in the field (refer to datasheet for details).
2G/3G/4G and WAN connection Backup guarantees an "Always-online" Internet connection