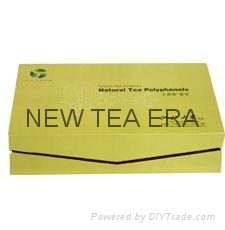 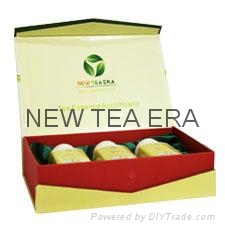 Usage: Twice per day, 2tablets one time swallow with water.

Storage method: Keep in a cool  and dry place.

Now modern science has revealed the chemistry behind the lore: green tea contains high levels of polyphenils and catechins, the highly potent antioxidants, which is 25-100times as strong as those of vitamin C and E. Several research studies have shown that green tea extract may potentially protect various parts of the human body against diseases such as cardiovascular system problems, various cancers, Alzheimer's as well as reductiion of stress related conditions and even weight loss .

The anti-oxidants in green tea extract has the ability to improve the health of the artery walls by stripping the plaque built up on these walls and strengthening the cells that line it, thus imptoving blood flow and circulation which is turn protect against cardio-vascular diseases such as stroke and angina as well as blood pressure conditions ans cholesterol issues.

The scientific name table epigallocatechin gallate, is one of the four main components of tea polyphenols. Polyphenols are one of the main ingredients to form a tea color, flavor, and it is one of the main ingredients in tea have health functions. Polyphenols can block lipid peroxidation process, enhance the activity of anzymes in the human body, whicn play anti-mutagenic, anti-cancer effect, its active substances Bureau detoxification anf anti-radiation effect, can effectively prevent radioactive substances invade the bone marrow, and strontium-90 and cobalt-60 can rapidly excreted, health anf the medical profession has been hailed as "Radiation nemesis". Polypheonls, including EGCG, EGC, ECG, EC four major components, the order of the antiocidant activity is EC＜ECG＜EGC＜EGCG.

Ultrafine grinding into a natural graphite powder, covered in steaming green tea.While ordinary tea contains high nutrients, but the tea is only true for the water-soluble portion of 35%, a large number of water-insoluble active ingredients have been thrown away as tea leaves. Experiments show that more nutrients can be sucked by eating tea than drinking tea, the nutrients contains in one bowl of Matcha is more than 30 cups of regular green tea, Japanese tea ceremony teachers so almost without exception, longevity later years.